Continued from the Denmark trip ——->

As we waited at Billund airport in Denmark to take a flight to Faro in Portugal, I was surprised to see passengers queuing up much in advance of the flight announcement,till I came to know that you get a seat on a first-Come-first-Served basis ! Looking at the crowd, I was relieved that we had reserved seats for which one had to pay a premium.

Our flight was delayed on account of inclement weather so passengers were permitted to head to the cafeteria. We decided to grab a quick bite as well and while we were at it, were alarmed to know that our flight was scheduled to depart! A couple of hectic minutes later which involved a frantic sprint back to the gate,panic at the realization that the aero-bridge was closed and so was the one-way door through which we had entered leaving us with a brief door-banging spree, a comic relief on spotting the unobtrusive door which led to the aircraft steps, a mad dash which was abruptly halted by suspicious security staff, we were safely in our reserved seats.

Whew ! For a minute there, Portugal had seemed far away.The flight itself was a tiny affair and I was a bit nonplussed to hear passengers clapping as the plane landed.Never thought it was so close !

Our stay was arranged at a rented apartment and Maria, our landlady, had stayed up way past midnight to welcome us. Maria was a bright cheery middle aged lady and ‘colorful’ was what came to mind as I took in her bright green top with multicolored leggings, a bright pink lipstick and an electric blue nail paint.She chattered away in her broken English which in the blink of an eye used to dissolve into Portuguese. She brightened up considerably when she realized my friend spoke fluent Portuguese.Maria is typical of the average Portuguese, who are extremely friendly and go to great lengths to help. There were people who actually walked a couple of meters with us to help us locate our bus-stop !

With a population just over half a lakh, Faro is a small city situated on the southern most part of Portugal.I always believe that small cities are perhaps the best way to experience a place in its unadulterated form, uncluttered by hordes of tourists and other distractions. The city had a laid-back atmosphere and a small town feel about it attributable to its small side streets and lots of intersections. Most of the smaller streets and pavements are cobbled and when the small city bus went careening down, I had a sense of déjà vu as I remembered a very similar ride through the narrow lanes of Goa.

We visited the Igreja da Carmo, a Baroque church situated near the city center.The surprisingly bland white washed facade of the twin towered church doesn’t prepare one for the rich ornate carvings inside. The altar and most of the carvings are gold plated and are of breathtaking beauty. 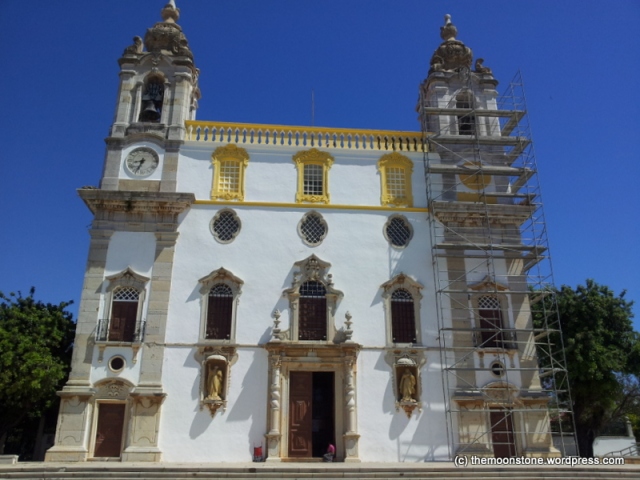 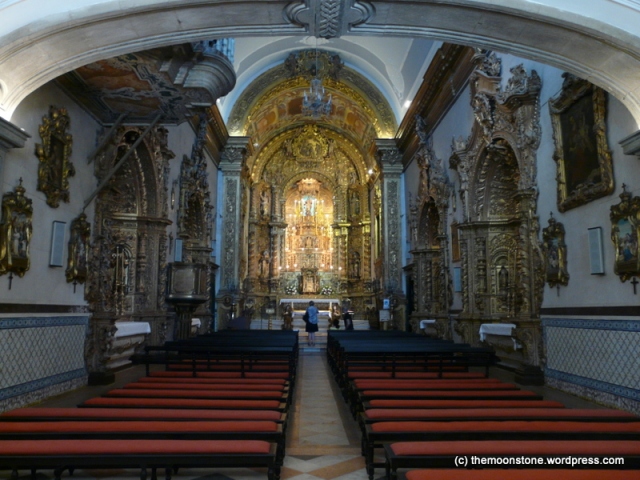 But it is the more macabre attraction behind the church which pulls visitors.This is the Capela da Ossos meaning ‘The chapel of bones’. The chapel is made from the bones and skulls of over 1200 carmelite monks and is supposed to serve as a reminder of earthly impermanence.

Our next destination was Lagos (Pronounced Laagosh), a two-hour journey by train from Faro. The sun,sand and sea is what comes to mind when I reminisce about my trip to Lagos but what will remain etched in my mind forever are the Grottos. A small maritime town boasting of 2000 years of history, Lagos’s economy is closely linked to the sea and its scenic coastline provides ample opportunities. The numerous boat companies offer various rides but the Grotto tour is a ‘must-see’. Made of limestone, Grottos are impressive rock formations carved by the sea and the wind.A motor boat takes tourists till the grotto from where a smaller boat takes people inside the different formations. As each structure is unique, every formation has been given a name by the locals.

I landed at Copenhagen and caught a train to Aarhus. Aarhus (Pronounced Owhoos) is the second largest city of Denmark. Denmark being an archipelago, the trains traverses bridges across the sea.The countryside is interesting with gently sloping farmlands dotted with windmills. Considering the windy weather, its no wonder that 20%-30% of the power in Denmark is sourced from wind.

Aarhus is an interesting mix of old culture and the strong vibrancy of youth and immigrant population owing to its universities and many educational institutions.The streets are broad and lined with houses built with red bricks and sloping roofs. While walking in Denmark, being aware of the cyclist lane is one of the foremost things for a tourist.Denmark is a country of cyclists and you can see Danes cycling even in windy and cold weather. Danes are sturdy people reminiscent of their Viking heritage and they strongly value their personal space and individual freedom.

Since I was staying with friends, food was home cooked and delicious, but on the rare occasions I did eat out, I managed to sample the only vegetarian open sandwich, the ‘Rugbrod’ bread and Danish pastries.

We traveled extensively by bus which is an excellent means of transport in Aarhus.Each ride costs 14 Kroner which covers all rides taken within the next 2 hours.

During my stay I visited the ARoS Museum which had an interesting mix of contemporary as well as fine art pieces of Danish Art from the Golden ages.

The statue of the ‘Boy’ built by the Australian sculptor Ron Mueck is a sight to be seen. It’s five meters tall and is made of silicone and fiber glass. The posture, of course is quintessentially Indian ! Another interesting attraction at the museum was a concept called ‘The 9 spaces’. These are 9 rooms which are painted black and host installations with spectacular imagery.I was captivated by the work of Bill Viola which consisted of five projections consisting of slow motion sequences in a dark room. The work thematises terms such as birth, death and rebirth.It was great to see art defying all concepts of its hitherto defined boundaries.

I saw the Aarhus Cathedral which is the tallest in Denmark with its construction starting in the late 12th century. Fresco paintings on its walls date from 1470 to 1520. A ship’s model hangs from its ceiling and is thought to represent man’s sail from cradle to grave.The ship is a very common custom in Denmark and acts as a reminder of those lost at sea. This particular one was interestingly rescued intact from a ship wreck which was heading to the Russian Tsar Peter the Great.


Right next to the Cathedral was a women’s museum which outlined the lives of women in Denmark.Women in Denmark enjoy equality in all spheres with majority of them working.The driving force behind this was the Women’s rights movement of the 1970’s and prior to that was the role women played during the times of war. The times of World war, though one of the worst times in history, interestingly propelled women to center stage in various parts of the western world. The museum offered an interesting way to chart the life of women in the 18th/19th centuries by allowing them to treasure hunt the artifacts related to a particular girl child and piecing together the life she lived.

A visit to Aarhus can not be complete without a visit to the famous Dem Gamble By (The Old Town). Its an open air museum with houses and streets rebuilt from an old era.It showcases houses from the 17th/18th centuries including a mayor’s house, a mintmaster’s house and several shops.

My stay in Copenhagen, though for only a day, was packed.We took a canal ride which covered the historical buildings of Copenhagen.

Though many were noteworthy, I was most inclined to see ‘The Little Memaid’ statue. It was much smaller than I had thought but the statue was still very beautiful inspite of the ludicrous acts of vandalism committed on it which included decapitation of its head, knocking it off with explosives and pouring paint on it !
We visited the famous Rosenborg and Amelienborg castles. Built by King Christian IV, Rosenborg palace’s treasures and royal regalia are breath taking. Each room is a sight to behold and one can see ceilings and paneling in Renaissance style, Flemish tapestries, Baroque furnishings, the Royal Thrones, tableware of Royal porcelain and venetian glass. The treasure room is another storehouse of collections which included the royal crown,scepter, precious jewellery, intricate statues made of ivory and other regalia.

My last stop was the Staten Museum for Kunst (National Gallery of Denmark) where I lost myself in the maze of French, European and Danish paintings.A lot of heavy weights including Picasso, Rembrandt are featured here but my personal favorites were the Ruben’s paintings.

This work is licensed under a Creative Commons Attribution-NonCommercial-NoDerivs 3.0 Unported License.
Join 352 other followers

I also write for